How to Make Your Own Cinnamon Powder 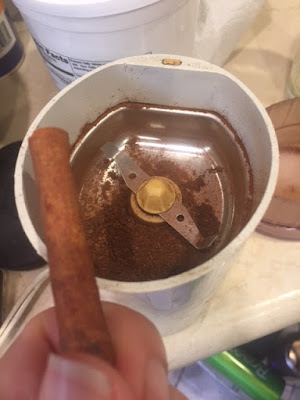 My kids LOVE our simple homemade cinnamon toast: toasted organic bread (gluten free for the one with Celiac) spread with softened organic butter and sprinkled with organic cinnamon powder. Well, while making toast this morning - woops! - we realized the cinnamon container was empty! What to do? What to do? Thanks to a cooking class I attended over the weekend with the Farmer's Market Groupie, an idea popped into my head. Why not grind our own cinnamon? Elisha Reverby (our cooking class instructor and owner of Farmer's Market Groupie) informed us that ALL spices, seasonings and seeds are best when FRESHLY ground. Those we buy in jars have been sitting on a shelf losing their flavor, scent and overall health benefits for months (maybe even years). Elisha used a mortar and pestle to mash the herbs and seeds we were using in our recipe -- and one of those ingredients (LIGHT BULB MOMENT) was a cinnamon stick. Then, this morning (2ND LIGHT BULB MOMENT) I recalled that some people use coffee grinders for such purposes - and that this might be a faster method for grinding up a whole cinnamon stick. So, we got out our 25 year old Krups Fast Touch coffee grinder (which still works as well as it did the day we bought it), popped in a stick of cinnamon, and PRESTO! We had fresh, aromatic cinnamon powder in seconds. My kids were totally very impressed! And, they found the flavor to be much yummier than the the old powder we were using. Looks like we've discovered a new way to make spices at our house!
Posted by Marni at 11:48 AM