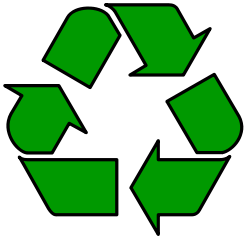 A while back I attended the Go Green Expo in Los Angeles and have to say I was embarrassed by the amount of green washing I witnessed. From big companies jumping on the "green" bandwagon (with few green products to show for it) to small companies introducing yet another stainless steel water bottle (yawn) with a yet another plastic spout (do our kids REALLY have to suck on plastic to get their daily water intake?). One furniture company claimed its furniture was "eco-friendly" because they used sustainable wood in SOME of their products. When I asked about eco-friendly upholstery and cushions I was met with blank stares. A company pushing an all-purpose cleaner of some sort sent a hard-core sales rep after me who seemed straight out of the 50's. He demanded to know if I wanted ONE product that could do everything. When I asked what everything was, he wouldn't tell me. Instead he shoved a small bottle into my hands, which I mistook for a sample. I said thanks and started to walk away and he demanded $8. I laughed and said I didn't want to buy it because I make all my own products at home anyhow and he, in all seriousness, actually then tried to haggle the price down. I put the bottle down and moved on. Possibly the worst offender of the day though was a company selling soft rayon-like t-shirts proudly made from recycled bottles. Apparently, I would be helping the planet if I purchased this petroleum-based, bpa-laden, artificial fabric that required a great deal of pollution and chemicals to mash up and "recycle" into a fabulous new t-shirt. That's more offensive than polyester. But hey, recycling is always green, right? I won't even go into the horrible key note speaker presentation I witnessed...okay I will. It was supposed to by the very organic, holistic-minded Mariel Hemingway, granddaughter of Ernest Hemingway and star of Woody Allen's Manhattan, whom I had admired many years back for getting her silicone breast implants removed and choosing not to replace them  (a feat that would kill most actresses' careers).  But she was late. Very late. And when she finally arrived, beautiful and out of breath, she hardly spoke three words. Instead, she gave the reins to Bobby Williams, a "practicing intuitive healer"  who was clearly her eco boy-toy companion (who knew there was such a thing!). Apparently Mariel and Bobby-the-healer had arrived late to their speaking engagement because they were rock climbing barefoot at a rural waterfall outside L.A. and lost track of time.  He went on and on about how we (you and I) shouldn't wear sunglasses because no other creature in nature wears them. Well, last I checked, other creatures don't wear clothing either, but lucky for us...Bobby chose not to show up naked. Were it not for the nice Ventura County couple who were selling organic mattresses for a steal and a rockin' kid's art station that gave us free all-natural sunscreen samples...I would have called the day a total waste and wanted to recycle it and get my money back.